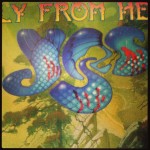 This week we give our first reaction to the @arcof