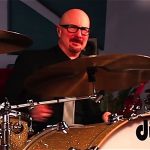 We were delighted to welcome Lou Molino, ARW drummer back to the podcast this week. He shares some thoughts about the ARW tour and the future. Also, Mark reviews his latest box set – Rick Wakeman’s Phantom of the Opera.

Mark’s Phantom of the Opera Photos: