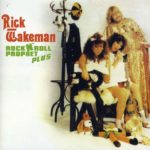 We discuss the amazing 1985 concert known as Rock in Rio and Mark reviews Rick Wakeman’s Rock and Roll Prophet.

Rock in Rio on Forgotten Yesterdays

The Mouradian bass is still intact, Kevin. It was the MPC Electra Outlaw white bass of Tempus Fugit which suffered the accident.

Ah right. Thanks Miguel! Also a great instrument, at least from the sound on that song!

And Leave It, and City of Love… and I have a theory that it’s the actual bass on Owner studio track (the Electra). I think Chris enjoyed the visual of the Mouradian bass so much that he replaced it for the live version and for the video clip of Owner and also of It Can Happen – it was a kind of “visual trademark” for that tour/album

A couple of comments caught my attention… First, as to why the various incarnations of The World’s Greatest Progressive Rock Band have been featuring the shorter version of “Roundabout” – I would be willing to bet that the general answer to that would be something along the lines of “We’ve been playing that song since 1972, about eleventy bazillion times so far, and we just want to get it over with.”

As for who might become a new Yes song writing team – specifically Billy and Jon – it brings up the interesting idea of two members who were strongly influenced by Yes music now composing Yes music. I think you know what I’m trying to (rather clumsily) say.

I just hope the new music is worked on properly with a great team and ends up as good as what Lee says about the ARW music he has heard…see this week’s episode!

Kevin, you’ve hit the nail on the head with “worked on”. Where does songwriting end and arrangement begin? How much of “Tales” was worked out by Jon & Steve? All the themes? I doubt it.
One of my all time favourite Yes recordings is “America” – certainly Paul Simon wrote the lyrics and at least some of the chord progressions from the original are used, but so much of it comprises themes that are written by Yes.
I wonder whether the raw material matters as much as what the band do with it. After all, Beethoven’s opening eight notes to his fifth symphony are nothing remarkable – it’s how he develops it that make the pece the masterpiece it is.

America is indeed a remarkable piece. Don’t forget to give credit to Bernstein too though Yes riffs even on his composition.

The Beethoven analogy works on one level except that LvB didn’t take that fanfare from someone else. It was all his own. He probably had the exposition in mind genius as he was.

Hi Jeremy, Perhaps you misunderstand (or I was unclear). My last paragraph was referring to raw material in general. I’m fairly certain Yes wrote and expanded some of their own themes 😉

On the subject of Beethoven’s Fifth I’ve always thought the transition from the third movement to the fourth is a perfect example of what Kevin refers to as “Darkness into Light”. It sends shivers down my spine followed by a exuberant joy every time I hear it (or even imagine it). Definitely a “Champagne Moment”

Good thoughts Tim! I also think it’s crucial to have a producer who understands. Billy? Perhaps someone from outside.

Yes indeed Tim, Champagne and Champs Elysium 🙂 The Ninth of course is thought to be the greatest piece of music ever written and I’d not argue against that. O Freunde

Glad the Wakeman interview made your day Kevin. I’ve uploaded the clips to Dropbox to make it easier for the Pod to get it.
https://www.dropbox.com/home/Danny%20Baker%20%3A%20Rick%20Wakeman%20BBC%20Radio%20Five%20Live%20Jan%202017
I’ve had an email from Martin Cook to say he’s going to send me a copy of the book, thanking me for the photos. I thank you Kevin for your making it all happen!

It’s been and will continue to be a great pleasure to know you and all listeners, Jeremy. I hope many more of these opportunities come along!

Wonderful comments! I’ve enjoyed reading them this week. The only thing I’ll say is that Billy’s involvement in the writing of new material…and even the production will be critical in making the next album strong….I honestly feel he has the best grip on what a Yes album should sound like.

I think that Billy has been in this business long enough to know how much he can accomplish and that Yes will not suffer from his extra curricular projects. In relation to Jay Schellen, what I would love to see is Yes on stage with two drummers, similar to the Doobie Brothers or The Moody Blues! What do you think?

Hi Craig, you may be forgetting that some of us HAVE seen Yes with two drummers, on the Union tour. And that was pretty amazing as we had not only the contrasting styles of Bill and Alan but the contrasting sounds of electronic and acoustic kits.

Dohh..! How could I have forgotten? I even saw that tour! (http://forgotten-yesterdays.com/_graphics/graphic/graphic_2091.jpg).

I think what I meant was, what do you think of two drummers, moving forward on a permanent basis? That would be something.

As usual, I am a week behind; the tortoise to all you hares! I really enjoyed listening to the Rock in Rio Yes concert. I loved the energy and the rawness. I also like that they didn’t clean it up; that you can hear Jon talking to the others, perhaps stage crew?, between songs. I am always amazed how close Trevor is able to get to the sound and feel of And You And I without a pedal steel! City of Love reminds me of how Jon can put a bit of bluesy grit in his voice. He’s not just limited to a clear and high range.

I am not too worried about Billy Sherwood’s songwriting. One of the advantages of co-writing as he often does is that it keeps the ideas flowing and fresh. It’s hard to say, “I’ll keep this for Yes, this one for a solo effort, this one for someone else.” Sometimes the song will tell you, sometimes it’s what the song will become in someone else’s hands.