It’s the beginning of September and the YMP is back. Mark and I are starting off with the next part of our ‘what did they do next’ series and this time we are back again to Rick Wakeman leaving in the run up to work starting on the Talk album, which he was originally going to be part of. Instead, he undertook some solo and collaboration activity and we will be discussing all that in more detail in this episode.

It’s also been an important week for Yes with the official launch of the pre-order for the new live album:

Following the outstanding success of their 2019 American tour, YES are to release The Royal Affair Tour,  Live From Las Vegas through BMG Records on 30th October.   Eager fans will be able to get hold of the PHYSICAL formats from 2nd October if ordered exclusively through the YES Store.  Formats are: CD digi sleeve with 12 page booklet; 2LP gatefold with 12” booklet and digital.   Pre-Order the album here:  https://YesBand.lnk.to/RoyalAffairPR

All YES concert tours are special events for their legions of fans and The Royal Affair Tour was no exception, conceived as a wonderful celebration of the best of British progressive music. Guests on the tour were Asia (with YES keyboardist Geoff Downes and a special appearance by Steve Howe), John Lodge of The Moody Blues and Carl Palmer’s ELP Legacy featuring Arthur Brown.

Steve Howe adds: “Having the opportunity to bring together the band members in the development of a well refined set of songs that captures the bands true potential is simply an honour for me.”

The show features many classic tracks across the period 1970 – 1980.  The set opened with No Opportunity Necessary, No Experience Needed, the Richie Havens cover from YES’ second album Time And A Word (1970).  Tempus Fugit was taken from Drama (1980), Geoff Downes’ first as a member of YES, while Going For The One, I’ve Seen All Good People and Siberian Khatru are from some of YES’ iconic mid-70s albums. The set included a rare live performance of YES’ cover of Paul Simon’s America and John Lodge shared vocals on YES’ cover of John Lennon’s Imagine. Soon-to-be YES drummer Alan White played on the original studio recording.

The Royal Affair Tour live set and album, recorded at the Hard Rock Hotel, Las Vegas, in July 2019, reaches a climax with two of the best-loved YES tracks Roundabout and Starship Trooper, always a high note on which to close the set.

The 26-date The Royal Affair Tour and YES’ performances were critically acclaimed:

The band sounded great and had brilliant visuals to accompany the songs. Sherwood’s bass playing is perfectly suited to capture the essence of the late Chris Squire while Geoff Downes and Steve Howe are still at the top of their games. Vocalist Jon Davison… looks extremely comfortable on stage, hitting each note with ease. (the progreport.com)

Recorded live at the Las Vegas Hard Rock Hotel, Friday 26th July 2019, The Royal Affair Tour, Live From Las Vegas was mixed by Billy Sherwood and is released by BMG Records. Customers who order via the YES Store will receive their albums on 2nd October with the album on general release from 30th October.

It’s Rick BE-AT-O… he pronounces his own name on his videos, and it’s really not hard, Kevin! *cough* xx (Thanks for another absorbing episode – great stuff, as always.)

I saw the Wakeman & Wakeman gig in Cleveland in ’93. I’ve attached the ticket. I hadn’t seen Rick solo since ’75 with ‘King Arthur.’ Wonderful show with Adam, Tony Fernandez on drums, I think Alan Thompson on bass. A wonderful surprise to hear all of “Journey” live! Could have done without “Paint it Black” myself. Met Rick, Adam & Tony backstage, thanks to Rick, who I’ve known since ’75. Rick was under the weather so left me early with Adam & Tony, whom I hadn’t met before. They were both very, very friendly. Tony & I talked about his work with Strawbs as well as his work with Rick starting with ‘No Earthly Connection.’ Took my youngest brother to this gig & he loved it, and meeting Rick, Adam & Tony. 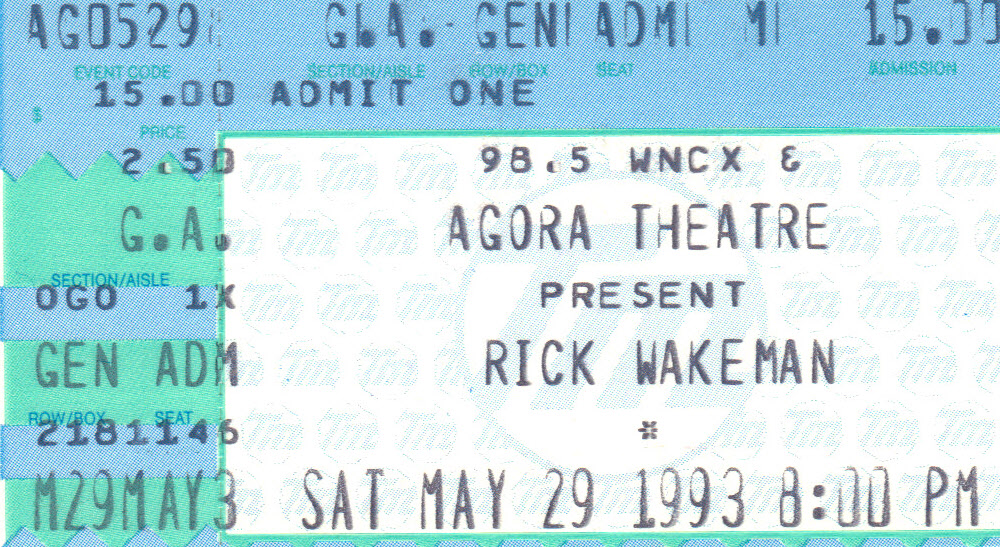 Yes, the new live album has a shorter setlist as BMG, their new label, didn’t want a 3LP release or 2cd set, and more familiar songs for the general public. And if you didn’t see my post on Facebook, SPOILER ALERT- the plan is for Yes to record a show or shows next year for a live album, with all of ‘Relayer.’ And hopefully film it for dvd/blu-ray.

I’ve owned the Wakeman with Wakeman CD since it came out in 1993. It’s not that great, but it has some nice moment. The trouble with it is that it’s chock full of cheap synth presets (a recurring problem with Rick’s keyboard setup since the early 80s.

However, I adore “After the Atom.” It’s a wonderful cheezy 80s track, like something you would expect to hear on Miami Vice in 1987. I love it! It’s a mix of Abba, Jan Hammer, Tangerine Dream and instrumental Pet Shop Boys.

I don’t have this album anymore, as I threw away 2500 CDs during a recent move. I’m only collecting vinyl so I can’t really comment much more on it, other than I’ve almost never played it anyway.

Regarding the live album, given the omission of Steve Howe’s showcase slot, it occurred to me that I would be very interested in a compilation of Steve solo spots from shows down the years – especially if culled largely from shows we don’t already have on official releases. That’s something I would definitely spring for.

That aside there I have some pretty predictable issues with this record – not a complete show, not a tour that came to the UK (and a tour I would have hated being no fan of either Asia or post 60s Moody Blues) and of course the lack of Gates.

I did go back and buy the ARW record having sworn I wouldn’t so maybe I will get tempted after the 2021 tour but the promoters already have my money for five tickets – an “investment” that wont mature for a full 17 months after purchase. When it comes to loyalty I feel I have more than done my bit over the last 46/47 years and so it’s a firm “no” from me even though it will be my first ever pass on an official Yes release.

Amen! I haven’t bought a single live release since the Lyon album from Yes. Enough, already! I also bought the ARW live record and blu-ray. Holy crap the fake audience is annoying. Great performance, though, and I was really happy I caught them on that tour.

My tolerance lasted through “50 Live” and even “From A Page” but, as you say, enough already!

I’ll still buy most of Steve’s solo releases as I am still interested in what he might come up with, DBA was a really pleasant surprise considering and Wakeman’s new record is mad and brilliant.

ARW didn’t so much for me. I liked the way Awaken unfolded but the rest seemed to be Yes with everything that made Yes dangerous-to-love as a creative force carefully removed so as to not frighten the people paying to hear the hits. By comparison rolling out two and a bit sides of something as relatively unradio-friendly as TFTO was a pretty edgy move by Yes Official. Playing Relayer in its entirety even more so.

Anyway …. wake me up when there is some new music!