‘IT’S CHRISTMAS’ as yer man sings in that song (which doesn’t feature in our festive collection). Mark and I select a few prog or prog-related Christmas songs to rank in another totally pointless but fun seasonal activity.

SEASON’S GREETINGS TO ALL

The music I use is the last movement of Stravinsky’s Firebird Suite. This has been used as introduction music at many Yes concerts. My theme music is not take from a live concert – I put it together from: archive.org

Warmest Seasonal wishes to everyone at YMP Towers and to Mark and family! Thank you for another fine 12 months’ worth of podcasting…

Interesting selection. ‘Songs from the Wood’ is probably my favourite Tull album, and “Run with the Fox” is superb. Very much agree with both your comments on that, and Miguel Falco’s bass cover is terrific, too. I also rather enjoy ‘Fairytale of New York” – but generally speaking I work hard to avoid Christmas songs, and I invariably loathe the popping- or jazzing-up of traditional music. (“Personent hodie” is the only track I can really bear on ‘Chris Squire’s Swiss Choir”, I’m afraid. Sorry, folks, the trad arrangements are way better. That said, it’s all very well put together…)

By the way, Andrew Pryce Jackman, who arranged ‘Fish Out of Water’ (and composed for it, as well) sadly died in 2003, so has nothing at all to do with ‘Swiss Choir’, which was released a little over four years later. The arrangements on that are by the talented Gerard Johnson (whose work also features on two recent Yes albums). Presumably there was also some collaboration from the conductor of the featured English Baroque Choir, Jeremy Jackman – who is Andrew Pryce Jackman’s brother. His other brother, Gregg, is the is a sound engineer and producer who has worked with Yes, among others.

Meanwhile, the choir on “Run with the Fox” features boys from St.Paul’s Cathedral, conducted by Barry Rose, who also plays pipe organ on ‘Fish Out of Water’. He was the choirmaster who tutored both Chris Squire and Andrew Pryce Jackman in Kingsbury, before going on to St Paul’s and becoming perhaps the most famous choirmaster and cathedral organist in England over the past 50 years. He attended Chris’s memorial service in London.

OK, back to my own Christmas staples – Monteverdi, Tallis, Bach, Handel, Poulenc and Messiaen. Have a good one, y’all!

Hi all. I’m a big fan of Christmas music, whether rock, classical, jazz, etc., and have been collecting for about 50 years. So I have & enjoy the Tull Christmas Album, and Squire & White on various 45s & cds, of course. I enjoy “Swiss Choir” and have 5 copies signed by Chris-the attached cover was signed for me by Chris & Steve Hackett. Greg Lake’s “I Believe in Father Christmas” may be my favorite pop or rock Christmas tune. Rick’s album, and Keith Emerson’s, are pleasant but don’t do too much for me except as background music in Dec. The Kinks’ “Father Christmas” gets a play each year in my house, along with Cheech & Chong’s “Santa Claus & his Old Lady.”

I recommend Jordan Rudess’ “Christmas Sky” album, on Bandcamp; also “Merry Xmas” and “Merry Axemas, vol. 2.” Let’s not forget “A Prog Rock Christmas” album with Billy Sherwood, Jon D, Pat Moraz and others, from two years ago. There are many others I enjoy & could recommend, but Christmas shopping calls me away. Happy Christmas & Happy New Year to everyone!

Could not agree more on Greg Lake xmas song and Run with the fox. One year we should all ask the radio stations to play Run with the Fox and get it rightly to the Xmas no1 as opposed to the mindless Sausage roll songs
Good fun – should have included 3 Ships, Mike Oldfield and a pile of Rick’s work too
Merry Christmas to all and here’s to a Covid free 2022!

Fun episode! Run With the Fox is great and totally memorable – I remember hearing it a few times on the radio when it was released and remembered it over the decades despite not having a recording of it in the prestreaming days. (Luckily now I have it on Fish Out of Water and Swiss Choir. And perhaps some of its memorableness is borrowed from the Sussex carol, to be fair.) So of course its victory over the other songs was completely fair and objective!
Agree with Simon about Songs From the Wood. But sadly I disagree with Simon on Swiss Choir – it is really a wonderful album. We have many cds of traditional Christmas church music, including a great Carols from Kings cd that has traditional arrangements of many of the same songs – it is beautiful, ethereal, sometimes haunting. But Swiss Choir provides amazing not quite rock reinterpretations that create joy in our household. My wife, who pretends not to dislike Yes but probably really does, and who has more of a choral background than I do, always wants Swiss Choir to be the first Christmas cd to go in the player. Try it Kevin – don’t listen to Simon – you will like it 😉

Fret not John, Kevin is perfectly capable of appreciating something I don’t, and vice versa! For me personally, there is no classical or traditional choral music which is ever improved by a rock backbeat (or pop/jazz schmaltz)… but I have no wish to spoil the fun of those who experience things otherwise. That’s the joy of different kinds of music and different sensibilities. Have a fantastic Christmas and New Year!

You too!
FWIW, in general I agree that rockin’ the classics is a mistake. (Hmm, Cans & Brahms?) Yet something about Swiss Choir gets to me. But I haven’t recommended it to my son’s choir director . . . .
(Still, Kevin, I think you should give it a listen!)

Agreed. Run With The Fox is a great song, and one not to be left till Christmas. I have shared before, but happy to jump at the chance of showing my complete collection of singles from all round the world. Including a couple of promos 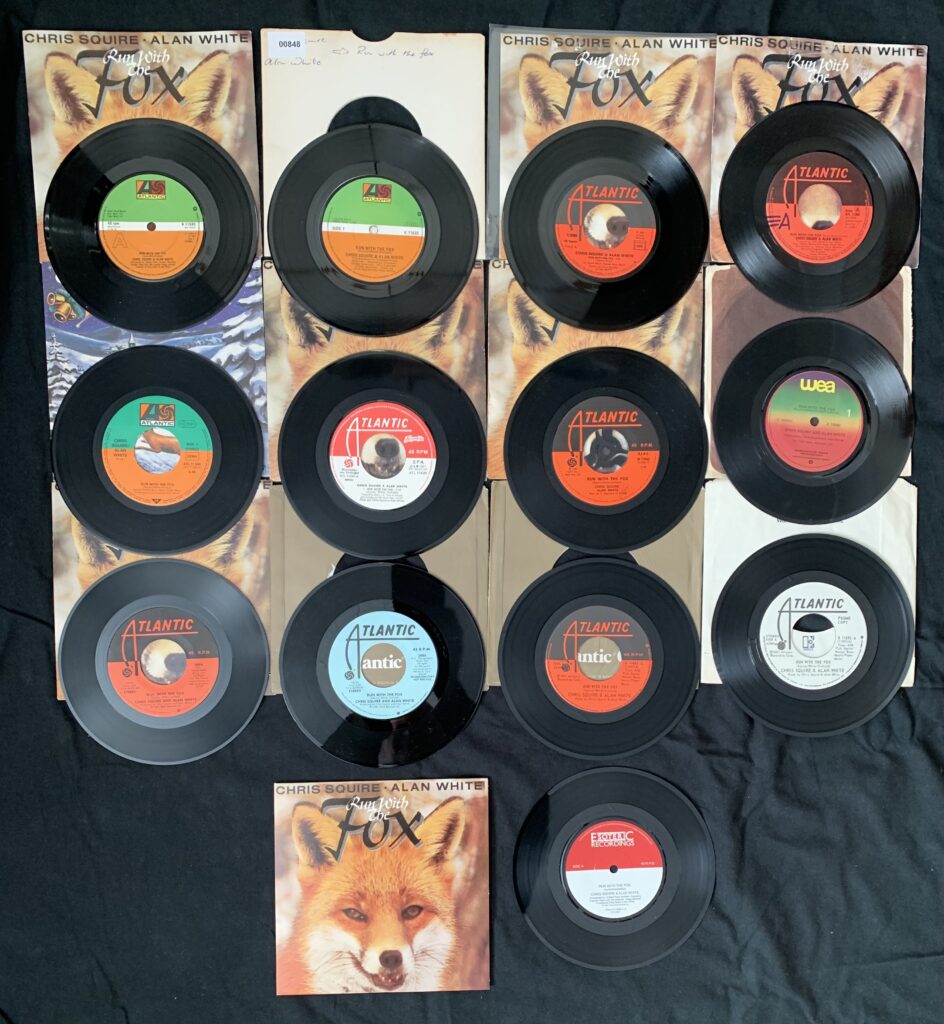 I have to agree that I Believe In Father Christmas and Run With The Fox are my 2 fave prog Xmas singles. As well as the usual Yes-related suspects, there are a few other excellent prog-related Xmas or winter albums out there that I really enjoy, by Jethro Tull, Tiger Moth Tales, IQ, Neal Morse & The Prog World Orchestra, Marillion, etc. I also love Sting’s winter album. And let’s not forget the more recent annual classic releases from Projekt Gemineye.
Season’s Greeting to all!

I am so surprised that nothing from Jon Anderson’s 3 Ships was on the podcast or here. It’s one of the two Christmas albums I’ll play before Christmas starts. I love his take on traditional carols and his original songs are so wonderful! You should have has 2000 Years, Where Were You, or Easier Said Than Done as one one the songs you evaluated.